How Tablets, Smart Phones Have Changed the Learning Landscape for Young Children 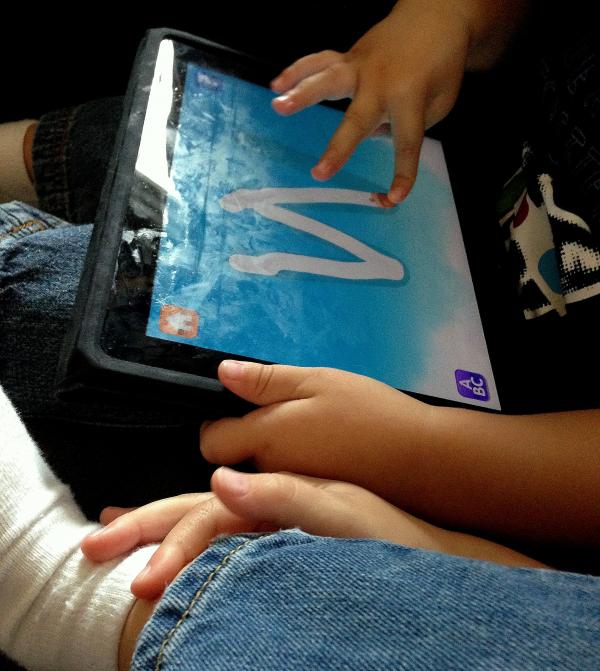 Theo, 2, gets a turn on the iPad while his 4-year-old brother Max watches.
Credit Deanna Garcia / 90.5 WESA


Bill Cosby once said “the essence of childhood, of course, is play.”

But play for children today is sometimes very different than it was even five or 10 years ago, as the prevalence of smart phones and tablets is changing the way children play and learn.

Take 4-year-old Max. He’s in preschool and is learning to read and spell, sometimes with the help of apps on his mom and dad’s iPhone or iPad.

“He’s only four, but I see him pointing out letters in print, like on signs or in newspapers or books that are laying around,” said Dawn Ferdinand, Max’s mom. “I think the fact that he’s tracing in these letters as he’s playing these games is helping him to identify them out in the real world and that’s really exciting to see.”

Technology isn’t going anywhere, and if anything, it will continue to become more pervasive as even preschools begin to use iPads and other new technologies. Many experts agree that the use of such technology can be a strong tool — when used appropriately.

“When it’s interactive,” said Sue Polojac, director of programming for the Pittsburgh Association for the Education of Young Children (PAEYC). “There’s a lot of talk about interactive and passive media. When you just hand a child an iPad or iPhone and there’s no conversation around that, or any guidance or not having any dialogue, that’s passive, the child is just passively sitting there playing a game. But when you interact with that child, when you talk, when they’re playing the app talk about what they’ve learned, talk about what’s happening now.”

That differentiation between passive and interactive is key, according to experts. While research is still developing around children and learning apps, most studies agree that children learn best when they work with others. Many parents are aware of this, and it’s why Max’s mom rarely lets him have free reign on the iPad.

“We like to be in the room with him when he’s doing it,” Ferdinand said. “If we’re not sitting next to him we’re around him, we’re watching him go through and sort of getting him to reiterate what he’s doing like, ‘Max what letter is that?’”

Still, some who are not completely comfortable with the ever-present nature of technology fear that when kids get older they’ll become technology zombies, who do nothing but sit and stare at screens. To that end, many studies recommend time limits for the use of screened devices. Many parents talked to for this story do set time limits, including Ferdinand.

“Whenever he’s (Max) in front of these screens, we keep it very … you know, there’s a time limit,” she said. “He can’t just sit there and do it for hours and hours. We don’t want them to be sitting there staring at screens even TV or iPads and the like. You have to get outside and you have to talk to people too!”

While Max works the iPad with ease, it’s notable that his two-year-old brother can do the same.

“The kids learned how to unlock the iPhones pretty early on, they saw us swiping our finger across the screen so they picked up on that pretty quickly,” Ferdinand said.

According to PAEYC’s Sue Polojac, there’s a term for kids like Max and Theo.

“Children today, technology is part of their world so we’re calling them digital natives,” Polojac said. “They don’t know anything differently around technology. They know about iPads; they can swipe an iPhone. Anyone who is a little bit older, we’re called digital immigrants. It’s not something we were born into — we’re learning.”

In 2012, PAEYC’s national group and the Fred Rogers Company released a position statement on this issue. It states, among other things, that the appropriate use of technology and interactive media is an effective tool to support learning and development and special considerations must be given to the use of technology with infants and toddlers. The position statement goes on to say that ongoing research and professional development is needed.

Technology is not new, but it is ever-evolving. For school-aged kids it no longer means only a computer and videos. The advent of touch-screens was a complete game changer for technology for small children.

“It made technology so much more accessible to them,” said Roberta Schomburg, a senior fellow at the Fred Roger’s Company who helped craft the position statement. “They didn’t have to have the eye/hand coordination or the cognitive understand that’s needed to move a mouse to make something happen, they just touch the screen and something happens.”

Using available technology should be dependent upon the individual child.

“There are many many positive ways that screens can add to our lives,” Schomburg said. “But we have to have some caution as well and think about whether it’s appropriate for this particular child, for this particular context and does the content match?”
Concerns for the Future

Some common concerns surrounding young children and technology include a lack of patience, not developing proper writing skills, addiction to technology and inactivity or obesity. But such concerns are not necessarily new.

“We’ve heard these same arguments about television, about the telephone, about any new invention that comes along,” Schomburg said. “There are always concerns.”

Ensuring a child doesn’t experience negative effects of technology use comes down to balance.

Schomburg also recognizes that sometimes a parent will simply hand their child a smart phone or tablet and let them play by themselves either while they prepare dinner or are trying to keep their child quiet at a restaurant.

“Sometimes you just need to get something done around the house so, ‘OK, here, watch Netflix for two shows or whatever, so we have to do that every once in a while,” she said.

Many researchers, including Schomburg, agree.

“My own daughter will say, ‘I’m sorry, when I’m trying to fix a meal it’s much better for her to do something than being distracted and something gets burned or something,’ so I understand that,” Schomburg said.

The biggest takeaway is technology itself is not considered bad for child development, rather it depends on how it’s used.

Some ongoing challenges include bridging the digital divide: making sure children in poorer homes and school districts have access to newer technologies and ensuring research and professional development keeps pace with emerging technologies. In the end experts agree that appropriate play, be it with old-fashioned blocks or an iPad, can help children learn.

This site uses Akismet to reduce spam. Learn how your comment data is processed.

Join Us in Our Refurbishing Efforts